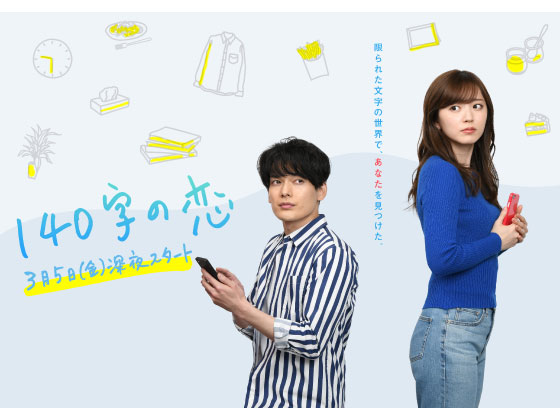 A short TV series based on Twitter’s 140-character novels (stories so short as to fit in one Tweet), it is a love story full of mysteries, where the real world intertwines with an imaginary one. The show stars Tsubasa Sakiyama and Airi Suzuki. Sakiyama is a popular actor, but this is his first leading role in a romance series. Suzuki debuted in the idol group ℃-ute. She’s enjoying great popularity as a model and a singer, admired even by her fellow idols.

A fictitious girlfriend who appears in a 140 character story, and the love found in the real world. The drama is set in a man’s room, where in just 140 characters, the story spreads into a limitless world, and a fantasy-style love story is born! Confined to just 140 characters, that is, a single Tweet. Shuhei Tsubuya (Tsubasa Sakiyama) has been in wheelchair ever since a car accident. He is captivated by the novels on Twitter written in 140 characters. Shuhei’s way of enjoying the stories is not only just reading them, but also by fantasizing about them unfolding in real life. In his imaginary world, there’s someone beside him—a woman whom he calls his “Twitter girlfriend” (Airi Suzuki). One day a woman who’s just moved in next door, Itoka Tsuji, comes over to say “hello.” As soon as Shuhei sees her, he knows immediately she is the girl in his fantasies. The two gradually get closer to each other, but Itoka turns out to be hiding something from Shuhei...